While we were in Croatia—lo these many days ago—we spent some time in a beautiful seaside park, the home of a monastery.

The scenery was gorgeous, but when we looked down we couldn't believe our eyes: 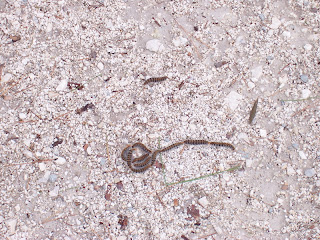 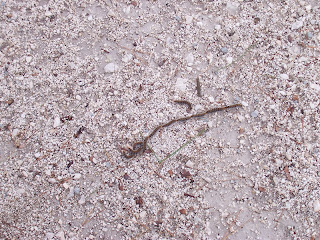 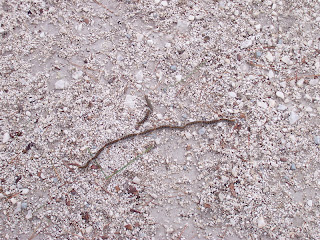 Fuck you, Andy Goldsworthy. This shit is for real!

Seriously, can anyone explain this? A caterpillar ballet, or perhaps a marching band? Sign of an imminent tsunami?

We continued speculating as we walked up the coast. We stumbled on a sort of miniature Croatian Coney Island, complete with murals… 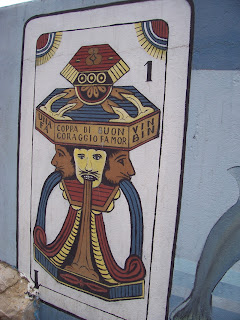 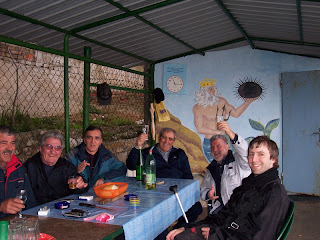 ...and washing their dishes in the ocean. 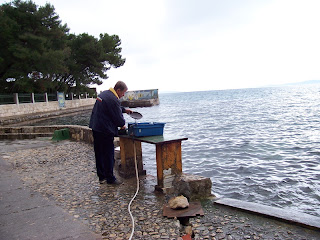 Yep, that was Rick in the first picture. They invited us. This must be where the caterpillars were heading! 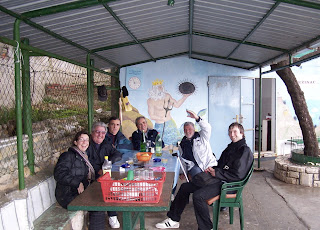 Well everyone, I’ve got to apologize for the dearth of posts lately. The truth of the matter is, I am days away from completing the first draft of a full-length play with a certain genius named Sasha Cucciniello. 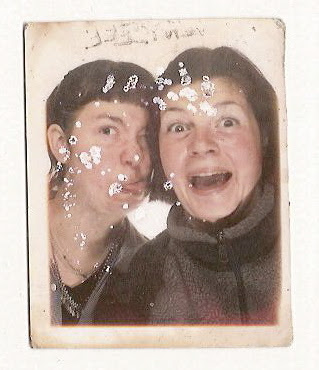 We've been working on Con for about a year now. It’s a one-woman show about her con artist father, and about con in history, nature, culture, politics, and relationships. I’m learning so much working on it—about writing, about people, about life—and learning so much from Sasha.

So even though there are lots of stories to tell—the Story of the Adriatic Andy Goldsworthy Caterpillars! The Story of Carnival! The Story of the Maskmaker! Save Síraly! A Cousin in Budapest!—I can’t tell them right now. In a couple days I’ll start posting again regularly, promise.
Posted by Ganch at 5:56 AM 3 comments: 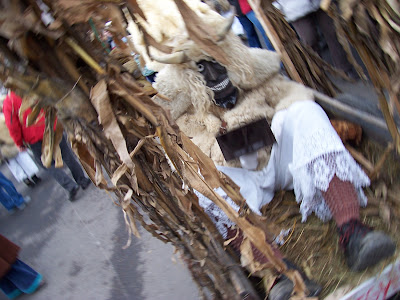 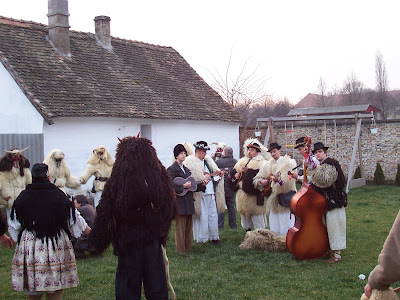 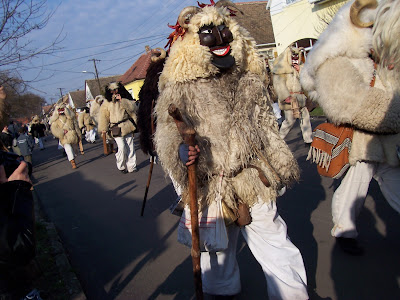 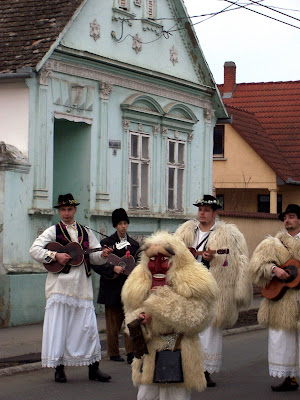 I must pause to say a brief word about Croatian food. (Yes, I am biting Bob Cohen's style, but hey, imitation is the sincerest form of flattery.)

New York native Rick misses one thing above all about America: Pizza. You see, pizza is a mystery to Hungarians. I’ve mentioned that certain locals put mustard and ketchup on pizza. And every week we get advertisements like this in our mailbox: 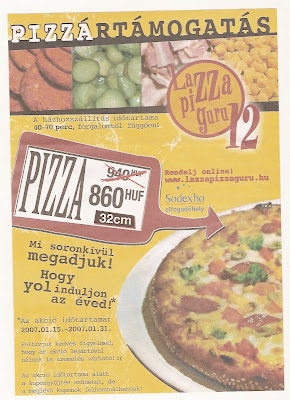 
Croatia to the rescue! Just across the Adriatic from Italy, Croatia’s coastal towns understand pizza. I was going to take a picture of our first decent pie in months, but I was so excited I forgot. The last slice was devoured seconds after this photograph was taken. 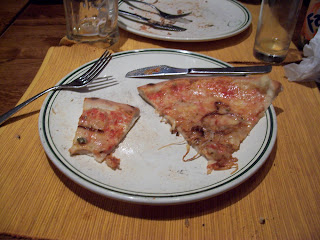 As for me, I’m a Californian. I can live without great pizza. I miss burritos. Sadly, there are no more Mexicans in Croatia than in Hungary. However, Split had some kick-ass sea food. Behold the fish market: 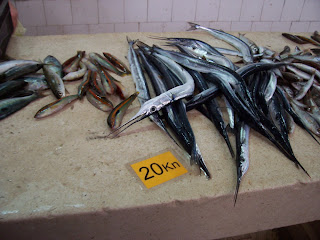 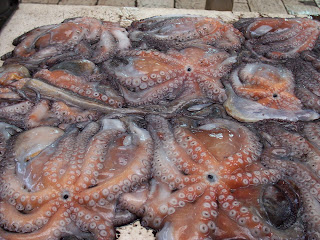 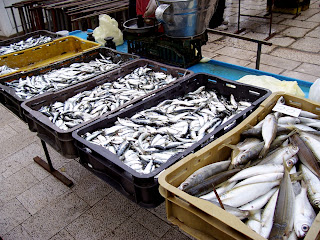 Here’s the dinner we ate a few blocks away. 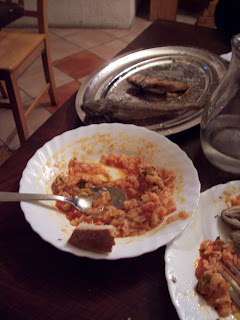 Once again, the food was so good that I forgot to record it in all its glory. The table was covered in dishes. But I will note that a mulit-course seafood feast and a liter of wine (!!) set us back about US $10 each. Hallelujah.
Posted by Ganch at 4:37 AM 4 comments:

Nothing—Nothing!—makes me happier than discovering a tunnel in an ancient building and climbing in. After graduating high school I thought seriously about becoming an archeologist. Volunteering on an archeological dig in Belize, I dug up Mayan trash heaps, cleaned pot shards, and ate BBQ flavored Pringles: good times. Too bad the dig was a sort of Gross Grownup Adultery Summer Camp, where drunken pot-bellied archeologists blindfolded their young blonde colleague and sucked chocolate off her sweaty sandal toes as her “birthday present.” I was drinking my first glass of rum (with Fanta, shudder) and her look of horror and disgust nearly made me hurl. As Professor Graves would say: “that’s the Sympathetic Nervous System.”

My dreams of becoming an archeologist were shit-canned, but not my love for ruins. A few years back in Cappadocia, Rick watched me split my head open in an early Christian monastery. I stupidly ventured into a dark room on the second floor without a flashlight, and slipped trap-door style into a 10 foot hole. The glasses were broken, the forehead gashed. The boy nearly had a heart attack before bravely rescuing me. Still, earlier in the day we had visited an underground city and explored ancient cave tombs. On balance, it was one of the best days of my life. 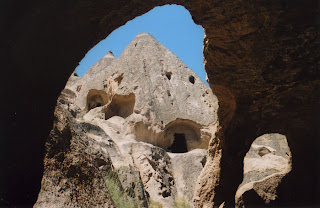 So last weekend in Split, on Croatia’s Adriatic coast, I was walking on air. Ruins! Beaches! Winding Medieval Streets! Palm Trees! Good Pizza! What more do you WANT in life? 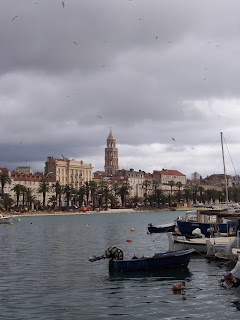 Split is incredible. The core of the city is the enormous palace of Roman Emperor Diocletian (245-312). Centuries later, when the coast was invaded by barbarians, the locals moved into the abandoned palace ruins. They never moved out. They built a medieval city inside: churches leaning against thick Roman walls, winding streets along the ancient palace hallways. 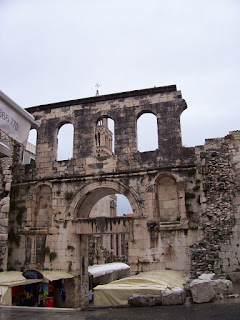 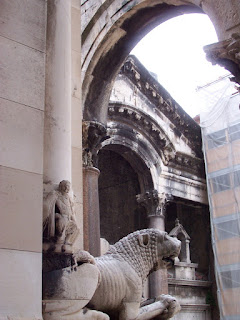 The mausoleum of Diocletian (a real “throw the Christians to the lions” kind of Emperor) was transformed into the town Cathedral, complete with Byzantine statues and Renaissance belltower. The Temple of Jupiter became the town baptistery.


A tip of the hat to Barmaljova for showing us how great it is to take video footage on your camera...I took this!

According to Rebecca West’s amazing Black Lamb Grey Falcon: “After the war [World War I] there was a movement to evacuate Split and restore the palace to its ancient magnificence by pulling down the houses that had been wedged in between its walls and columns; but surveyors very soon found out that if they went all Diocletian’s work would fall to the ground. The people that go so quickly and darkly about the streets have given the stone the help it gave them.” 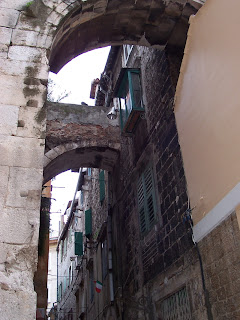 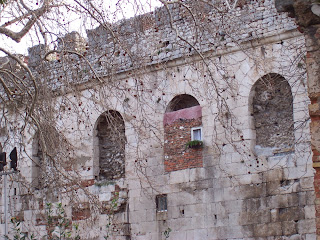 And so Diocletian’s palace is in some ways one of the best preserved ruins of the Roman world. The little shops and hotels and apartments and churches and cafes of Split’s city center rest on the empty cellars of Diocletian’s home, where you can still trace the layout of the vast palace that was once stood above. 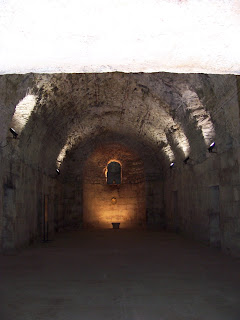 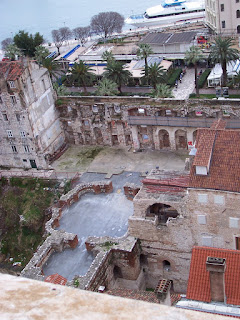 Split spilled out of the Palace walls, of course. A medieval and Renaissance town grew right outside the old stone gates. 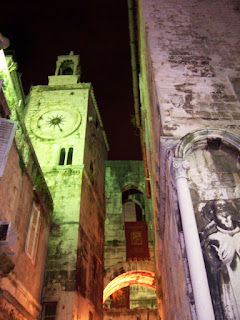 In later years, other layers of city have grown like tree rings around the center. The town with ancient Rome at its center has an outside rim of huge Communist block housing. Just like you can read dry years and wet years, forest fires and earthquakes in the rings of a tree, in Split you can see history frozen in marble and stucco and concrete. 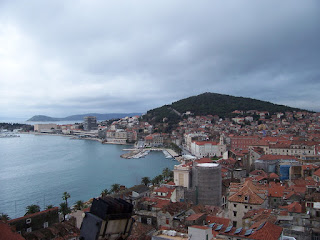 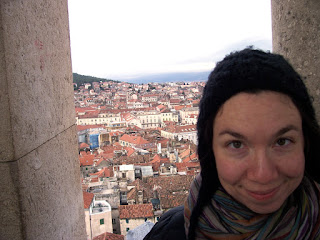 Email exchange with my Hungarian bandmates, who don't read my blog: a cautionary tale about the dangers of trying to impress Hungarians by fronting like you understand their devil language.

Just when you thought you had an ace in the hole ...

I just got back from my first Hungarian lesson!

Tölgyesi Péter
to szuteren
8:45 am

you must be kidding, bet even you can not tell what that means:)

Lagniappe: New Orleans for "a little something extra thrown in on the side."

My fellow fiddler Laci showed this to me this week, and I couldn't resist sharing. James Brown (looking like a middle-aged female librarian...with soul) calls both young Michael J and Prince up to the stage. As wonderful as it is to watch the young MJ, pre-alien metamorphosis, Prince is the real star of the show. Does Prince ride up to the stage on the back of a large white Hell's Angel? He does. Does he flamboyantly toss a white glove to the audience, only to have it tossed back in his face? He does. Does he threaten the mic stand with a karate chop? You know what, words can't do it justice, just watch: