Rick and I head to Serbia this weekend, so we'll be missing the Amerikai Rodeo. 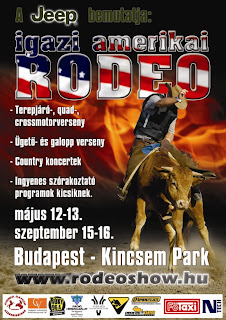 Let me back up a minute, cause I've got a story about this.

Not long ago, Nate and I checked out City Park. The park's most famous sight is a fake castle: one of those 19th century protodisney deals slapped up for an exposition and left to permanently tickle the city's fancy. On our way to see the fake castle, we see some fake Cowboys. 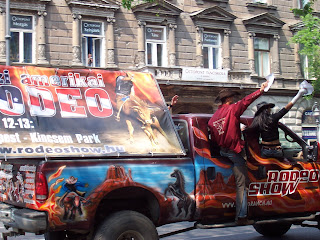 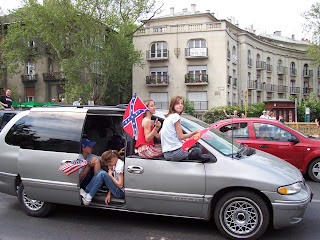 They're cruising Andrassy like it's the strip between 7-11 and Taco Bell. What could possibly make this more bizarre? Oh yeah: 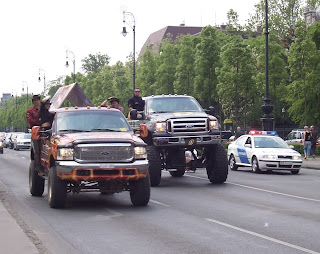 In the park, we run into The Fake Indians. Now, I don't have a picture of this, so you'll have to imagine. They wear war paint, fringed buckskin, huge feather headdresses, beaded necklaces, moccasins--everything but bows and arrows. They dance in a pow-pow-ish circle, war whooping. Their soundtrack? Ancient Cherokee Anthem "The Sound of Silence," played on pan pipes with a Mystical Synthesizer Backtrack. Why pan pipes? THEY'RE FREAKING PERUVIAN. Why Simon and Garfunkel? I can't help you with that. I mean, why Ace of Base? (Q: Do they play "All that She Wants?" A: Need You ask?)

I see the Ersatz Indians everywhere, ALL THE TIME. Their fake-o appropriation of another culture's stereotype makes me so mad I feel the need to either fight them or make a documentary about them.

While I was foaming at the mouth and pawing at the ground, Nate lightened the mood a bit:

"If they call themselves Indians, they should go fight those cowboys!!"