1. Fellow Brooklynites and dear pals D & M moved to Budapest. They've been doing some wide-eyed blogging of their own at Curious Expeditions.

3. In a strange twist of fate, I'm currently writing a kids' book called NASCAR's Greatest Moments. Between watching NASCAR highlights on youtube, drinking Hungarian moonshine, and listening to Dolly Parton on repeat, I'm teetering on the brink of redneckishnessdom. Rick says I'm practically hunting deer with a bow and arrow. By the way, the more you learn about NASCAR, the more you realize that Talladega Nights is eerily accurate.

4. Worrying about money, then getting more freelance work, then going out to fancy expensive pizza twice in one week, then remembering that we actually (oops) haven't been paid for books we haven't even started. One book is about Musical Sampling and Remixing (OK, fine.) The other is entitled...wait for it...American Idol Stories: Taylor Hicks! Aren't you jealous? Apparently he has a fan club nicknamed "the soul patrol."

5. Discovering a number of really cool and fun teahouses where you sit on the floor.

6. Writing an 8-episode series of (podcast) radio plays, to produced this summer (hopefully! cross your fingers please) by the ladies of Red Metal Mailbox. It's about Coney Island!

7. Feeling sad about missing so many important weddings and graduations back home this summer. 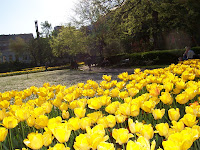 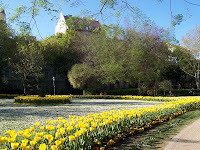 9. Eating ice cream every day we get warm weather. That's one Hungarian custom I can get behind.

10. Can't be bothered to blog, apparently.

1. D, on the last night's Besho Drom show:
"That electronic saxophone makes them sound like the alien band in Star Wars."

2. Rick, on the Hungarian rappers who opened for Besho Drom:
"It's weird to watch rap and not understand any lyrics. I kinda feel like I'm in Pootie Tang."

3. Me, during a four-hour political conversation:
"You really think he's the hidden hand behind everything that's happened in America for the last 40 years? You're telling me George H. W. Bush is the Suge Knight of American politics?"
Posted by Ganch at 12:27 AM 4 comments:

Tonight's the final hurrah of one of my favorite places on earth: Tonic. I interned at Tonic in the spring of 2000, during my second-to-last semester of college. I took one look at their January music schedule and realized (a) I absolutely had to go to every show they had that month and (b) I definitely could not afford to pay. The internship wasn't even close to a fair exchange: in return for entering mailing list names into an ancient computer, I saw upwards of 60 shows.

Why's Tonic closing? There's a fancy condo going up next door, owners are all mobbed up with the mayor. Higher rents, noise complaints, rinse and repeat. I'm sick of feeling sad about this sort of thing; its inevitability makes it even more disgusting. 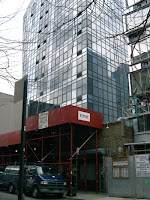 My home base here, Síraly, narrowly escaped the bulldozer this week. Luckily at the 11th hour (actually at 1 am the morning the police were supposed to come knocking) they got a reprieve. They'll stay open at least until the middle of May.

Síraly's an interesting contrast to Tonic. It's smack dab in the middle of the old jewish district, the 7th, home of most of the city's hip young cafes and bars. Síraly is the kind of place that is still possible in Budapest, and unthinkable in today's Manhattan: three floors of bar-cafe-music venue-theater-movie screening room-community center-dance club-living room, on a very hip street, run by a collective of energetic young people. Oh--and it's a squat.

That's the problem, of course. When the founder of Síraly decided to build the place, he tried to buy the building, which had been standing empty for over a decade. But his efforts to do things the legal way were thwarted by complex local politics, graft and corruption. The full story has been explained to me, but was too complicated to repeat here (read: I couldn't even fully understand it). The bottom line was that Síraly's founders couldn't buy it, but no one else could buy or rent it either, so it was just going to continue to stand empty. So Síraly's organizers broke in, spent good money on renovations, gave the owner a copy of the new key. Presto-changeo: instant community, the sort of place where you always know someone, where you can book an impromptu gig for tommorow night with one phone call, where you can spend hours nursing an espresso without anyone giving you a hard time. Like Tonic, they get a lot of noise complaints. Here's hoping they don't pull down paradise and put up a condo.
Posted by Ganch at 7:31 AM 5 comments:

Passover
For the last five years in New York, I had the honor of co-hosting the infamous Punk Rock Seder, AKA The Hardest Working Seder in Showbusiness, AKA The Congos Feast of the Passover. Together Garth and I cooked feasts for 35, adopted new Passover traditions, even synthesized our own haggadah. We’ve had guests end the night asleep in the bathtub in a half-inch of used Manischevitz-–now that's a party.

So it was hard for me to imagine how on earth I was going to find a seder that could compare. Would I understand the text? Would it be OK to laugh? Could I even find anyone I wanted to spend the holiday with? Thank god for Eszter, who invited us to the Síraly Seder at Adam’s house (and spent the whole night translating for us!) The scene was much like our Brooklyn seders: jews and non-jews together, too many cooks in the kitchen, lots of jokes and textual arguments and digressions. Síraly published a special Passover issue of their in-house zine, comparing four different haggadahs side by side, including a 1920s joke haggadah. 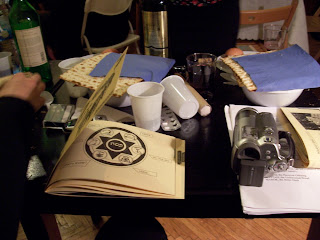 The zine also featured some modern humor, illustrating the story of the The Four Children as follows:

The Wise Child: Wise Child comic cover
The Wicked Child: Evil Clown
The Simple Child: George Bush
The Child Who Does Not Even Know How to Ask: Paris Hilton

Well, it turned out I could really understand a lot, even without Eszter’s narration. The songs were the same, even the melodies. The dishes, the order of the meal, comparing notes with my neighbor on our grandfathers’ seders—just like home. Even the littlest guest stealing the afikomen... 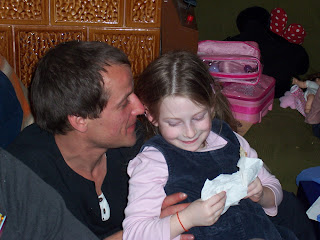 Easter
Easter Sunday was a beautiful beautiful spring day. Rick and I walked up Gellert hill. 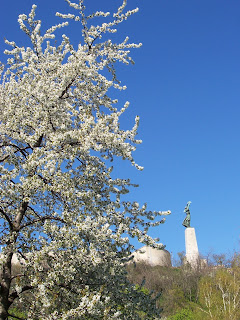 I’ve heard a lot about this Hungarian Easter tradition where men spray women with water or perfume, and women give them a painted egg. I actually spotted a bunch of giggling kids with huge water bottles in our neighborhood, ringing doorbells and looking like anxious trick-or-treaters.

The night ended in our first party at the apartment of the famous Tom Popper. Tom knows and likes literally everyone in the city. He’s easygoing, sociable, friendly, interesting, in short, the perfect host. Before I met him I heard so much about “Tom Popper’s” that I actually assumed it was a bar.

I was at the party to participate in an American Roots jam with Bob Cohen and a visiting musician/writer friend. We started playing around 9 and didn’t look up until about 12:30. During that time the party had changed dramatically. The night started with a bunch of long-term expats eating ham and talking to eachothers’ children. By 1 am everyone was young and rambunctious and loud and trashed. People danced to our Bob Wills tunes. A bald guy sat listening to us stock-still for over four hours, then wordlessly keeled over onto Tom's bed. The cast of the BBC’s Robin Hood series (which apparently shoots in Budapest) showed up. We met Will Scarlett and Robin Hood himself. They had a curly-haired, big-bellied friend who we assumed was Friar Tuck, but he turned out to be just some dude. When Rick and I stumbled home at 2:45 am, a whole new group of people were just getting there. Happy Easter!
Posted by Ganch at 4:53 AM 3 comments:

The Mother of All Táncházes

The Táncház movement started in the 1970s, when young Hungarians began researching and reviving old music and dance forms. The name literally means "dance house," and refers to both the movement and a type of event: a long, sweaty folk dancing party with lots of live music and raw booze.

I really can’t pretend to know anything about Hungarian folkdancing. I'm just barely getting to know the difference between various regional styles, learning how to listen to the music. I still mentally divide the folk dances into four major categories: slappy, skippy, twirly, and circle. Embarassing when I talk to people who actually know what they're looking at. But the tiny bit I've heard about the actual origins of these dances is tantalizing: one dance has connections to old military recruitment traditions, another is a rough but perfectly preserved renaissance court dance, etc.

So, as part of my ongoing effort to feel around the edges of this movement, this Sunday I checked out the mother of all Táncházes: the National Táncház Festival, in Budapest's futuristic Papp László sports stadium. The dome is alive with the sound of music, from a giant dance floor: 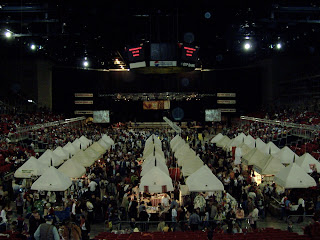 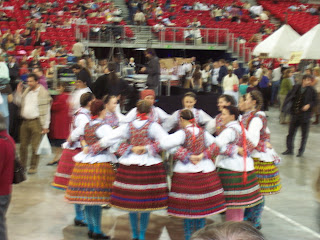 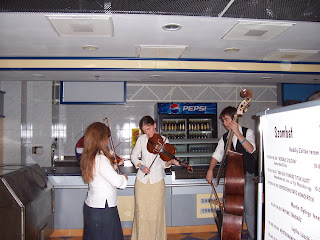 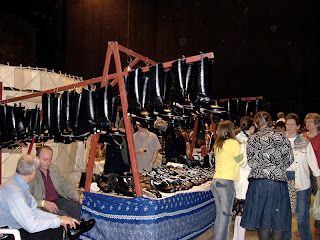 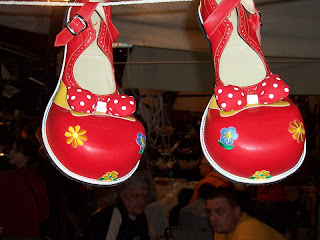 A ton of veeerrry country Transylvanians were on hand to sell handmade embroidery and second hand clothes: 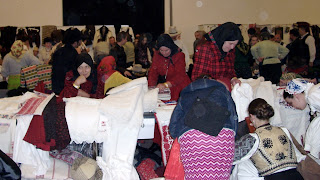 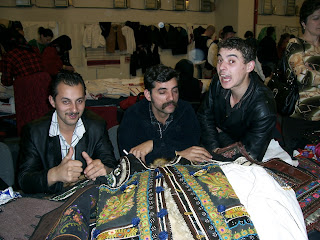 There were performances from kids who go to Táncház school... 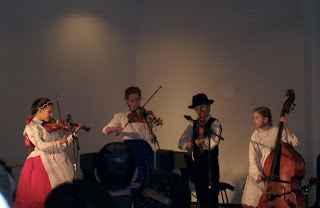 ...and kids learning to dance. 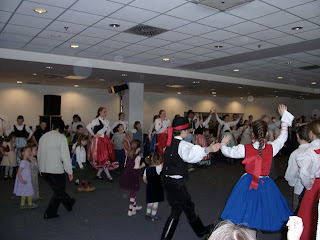 But the best part was watching some serious folk dancing. Here's some real pros rocking the hell out of a rowdy slappy dance:


And a mind-blowing twirly dance:

The Budapest Fringe, which took place this past weekend, has a misleading name. Unlike the Edinburgh Fringe, it’s not an alternative theater blowout. Unlike the New York Fringe, there’s no faux-edgy musicals desperately seeking a big producer. The Budapest Fringe is more like a smorgasboard of local theater, dance and music from semi-professional groups. It’s just one weekend, and most acts are 20–30 minutes long. It’s free, which is sweet. Even sweeter is the venue: the incredible “House of the Future.” 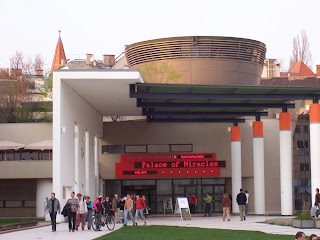 It's a complex of old factories converted into theaters, complete with cozy pubs, reflecting ponds, fountains and grassy knolls, plus a technology museum/exhibition space. 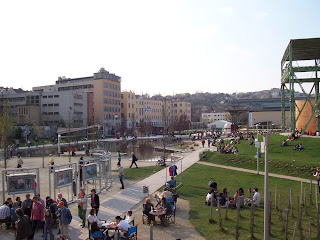 We saw a lot of performances:

-A bland klezmer group with an extremely short, very butch clarinet player who who looked like a white female Reverend Run. In the middle of the last song, she grabbed the mike and busted. I caught the words “klezmer” and “kosher."
- A really serious Hungarian folk/rock band that glared at the audience like we owed them money.
-A charming gyspy fusion band. 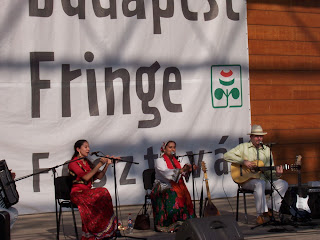 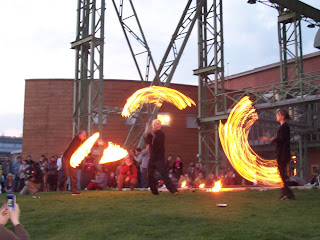 -A good but too-brief set by Balkan brass outfit Adje Braco.
-Last but not least, experimental theater: “thirty-four separate scenes of metaphoric images connected by the fullness of human existence.” I’d describe it for you, but if you’re the type of person wants to hear about it, you’ve probably already seen it at other fringe festivals, by other groups, under other names.

That sounds like a lot on paper, but Rick and I still had time to get French fries, beer and ice cream, and sit around in the sun. 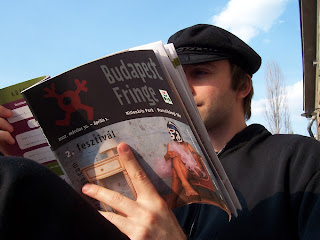 Budapest is a small town. We ran into about 6 different people we know over the course of the day: the ex-metalhead mandolin player from my bluegrass band, a couple Moroccan musicians I have cordial but awkward French conversations with, a Guatemalan filmmaker/poet with a Hungarian girlfriend who looks exactly like Maggie Gyllenhaal, and a couple of Extreme Circus School Dickheads from Schenectady. You know, jokes about exploding avocados and child molesting clowns --ugh, I’m over it.

Afterwards we peeked into the giant Mammut Shopping Center and discovered a bowling alley…with no music. I really wanted to play a game but Rick felt it was sacreligious to bowl without listening to “Fly Into the Danger Zone.” But I have faith I'll win him over.
Posted by Ganch at 11:11 AM No comments: