My last post was just after New Year’s, and here it is the last day of school in Budapest. There’s no excuse for my chronic blog silence, so I’m not going to attempt to make one. Instead, I will rescue several trivial, but funny, episodes from blogless oblivion.

1. Yoda.
Apparently Yoda speaks Hungarian. The story (which I really don’t want to check out, lest it prove to be false) goes like this: during shooting for the Yoda scenes in the first star wars, George Lucas worried that Yoda didn’t sound alien enough. So they asked a Hungarian cameraman on the crew to translate Yoda’s lines from English into Hungarian and back again, word for word. The result? Crazy backwards Yoda talk. “Many years study you must if a Jedi you would be.” It’s Hungarian syntax! I wish someone had told me this before, I might be conversational by now. Thanks, Bob!

In other news, my 12-year-old English student Kata continues to be a source of unintentional amusement. When I asked her to use the word “rebel” in a sentence yesterday, she confidently replied “When you are sick, and you want get better, you must eat a rebel.” Next, I asked her to use the word “church,” and she offered “I church my ball.” Then she giggled uncontrollably. I'm beginning to think she's just messing with me.

2. Cherry Pie.
This winter, Rick and I both wrote books on global warming. What does this have to do with Cherry Pie, you ask? This week, we decided to use some of the fresh sour cherries at our local market to make a delicious cherry pie. We decorated the top of the pie with a cute, goofy sun made out of dough. Unfortunately, I turned the oven up too high. Much like our earth, pies are vulnerable to rising temperatures. When humans are careless, our pies pay the price. 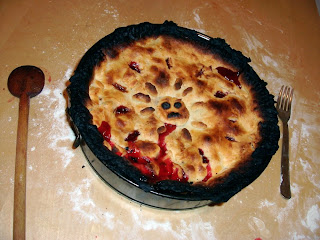 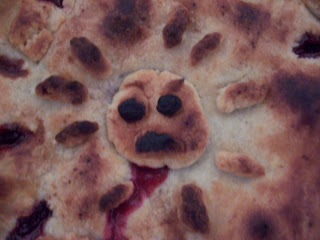 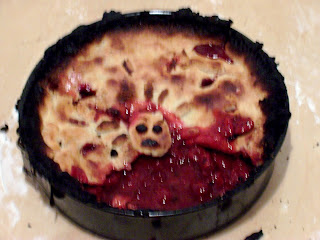 3. Unintentional Poetry
It’s summer time, and that means I’m working on new background articles for The Met radio broadcasts. I’m ridiculously paranoid about getting rid of text, so when I edit articles I create an “outtakes” document, where I paste erased phrases. Sometimes this results in tiny, unintentional poems. Here are three of my latest:


THE DAMNATION OF FAUST

Remembering the sensation
the lures and dangers of knowledge
torn between longing for the infinite and lust for earthly pleasures
set in the years before and during Germany’s descent into Nazism.
Towards the Damnation (In the mean time in between time)
and at the end of that decisive section I was obliged to abandon the peroration of my piece
It wasn’t mere paranoia.


LA RONDINE
the original spaghetti western,
with no higher philosophical purpose
And the world was unstable, changing rapidly, and frighteningly, every day.
kept his head in the sand about the war for a long time.

What, she just walks away from the relationship, and that’s the end?
About the death of youthful illusions.
and willing them to become present reality
sorrow, the regret of the passing of the world, the waste and sorrow and heartbreak on the way to the future,
He can’t write what he wants, and he can’t create a perfect muse.
held a poignant sweetness
The past will never return (and nothing will ever be the same again.)
It’s a small tragedy,
It’s a human-sized tragedy.
Posted by Ganch at 9:49 AM

gancher the great! I was in nyc this week and got to catch up with some of the homies... we talked about you (exciting!) so I'm especially excited to see you blogging here, again, finally!
I was trying to convince kermensky to come and check out the bay, she says when you're back for a visit she'll come too. how freaking fun would that be?!
love the little "oh no mr. bill" scared burned face on the cherry pie (which still looks delicious, by the way), was that intentional?
new york! oakland! buda?