Yesterday we visited our friends Nikola and Fanni. Nikola is a playwright-novelist-poet-writer from Croatia. Since we're going on vacation in Croatia next week he drew us a map: 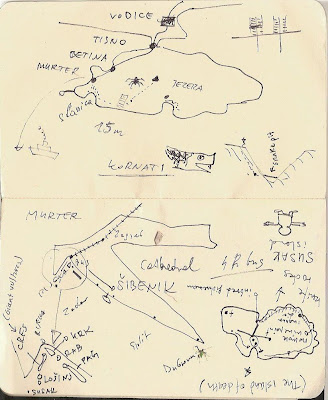 Nikola waxed poetic about the beauties of Croatia, which he loves but has a complicated relationship with (Nikola hates all borders. "Have you ever seen such a country? Shaped like a fucking pretzel.") But somehow all his tales of gorgeous beach holidays slowly morphed into The Hills Have Eyes horror stories. A simple off-trail hike around Susak became a day-long death march. Expecting a quick stroll around the tiny island they only brought a bottle of wine and half a loaf of bread. No water, no sneakers, no directions, no roads. And they soon discovered ... well, take a closer look. 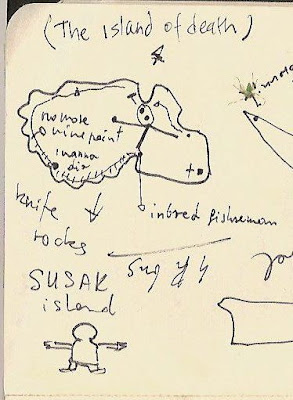 According to Nikola, the people on this island mistrust all of their neighbors, and have intermarried strictly among themselves for centuries ("Their motto is 'We Save the Blood.' That's why they've got the short little freak legs, you know?") He claims that a bunch of Susak islanders migrated to Pittsburgh, where they all now live on one block and continue to Save the Blood.

Then there was his story about the beautiful canyon that turned out to be a... 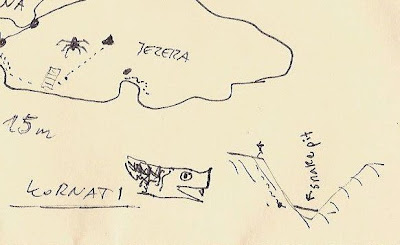 ... snake pit full of incredibly poisonous jumping snakes that live in trees and prey on unsuspecting hikers at night. ("The snakes with the horns ... we call them a 'snake snake.' You know it? If it bites you, you have maximum one hour to live. Completely fucked.") Other terrors noted on the map include black widows and giant vultures.

Maybe we should go straight to Sarajevo ...
Posted by Ganch at 2:09 PM